We were headed to a housewarming party over the weekend, and I wanted to come up with a  special gift to give the lucky new homeowners! While I was at Homegoods, I came across a pack of wooden utensils and snatched them up!

Once I got home I knew exactly what I was going to do with them, so I got started! First, I got my alphabet stamps and a permanent marker and began to spell out each utensil name. I colored over each letter with permanent marker and quickly pushed onto the utensil, repeat until completed. Next, I used a small piece of painters tape to tape around the bottom of the utensil, each one at different lengths. I then grabbed my Martha Stewart metallic craft paint and began to paint the bottoms of the utensils. I put them upside down in a mason jar to dry. I coated them a good 3 to 4 times for a solid coat. Once completely dry, remove the tape.
To dress them up a bit, I bought a white dish towel, tucked them into it and wrapped a piece of twine to secure. I also included a yummy Summer Berry Cheese Pie recipe! And there you have it, a fun and simple housewarming gift! I’m going to make us a set of these because I thought they were just darling! I love the painted tips < 3

Sharing this project on these fabulous blogs!
I’ve been so excited to do this project! We had just went to the pumpkin patch in the early part of the week and I could just barely wait to paint those pumpkins 🙂 I headed to Hobby Lobby to pick up my supplies for this project. I opted for a pearl finish, metallic silver, antique gold and midnight blue craft paints. These were 30% off at the time (making them about $1.15 each). I also grabbed a cute stencil in the same isle for $2.99 ( I will use this for lots of other projects!) I browsed the ribbon for something that really stood out to me. I didn’t find the exact color I was looking for, so I went with this navy blue and white design that will go well with my paint colors ( originally $3.99 but I used a 40% off coupon, making it $2.42).
Once I was back home, I grabbed a painters tarp and my two large pumpkins and headed to the deck. I sprayed these with a cheap, white spray paint I bought at Walmart previously for $.97. While those were drying, I grabbed a few paper towels and small tupperware lids and got to work. I like to use the tupperware lids for my paint because they wipe clean really easy and you can re-use them over and over! I started my first pumpkin with the chevron design. I used about a 1.5 inch piece of painters tape cut in half to arrange the design. The first color I used was the metallic silver, and I brushed it over the entire top of the pumpkin including the stem. I did the top of my small pumpkin with the silver as well. Once the silver was (somewhat) dry, I painted the bottoms with midnight blue. I grabbed one of my large pumpkins I sprayed white and tapped a stencil “R” in the middle. Let me tell ya, stenciling a pumpkin was a little bit of a booger! Any who, I also used the midnight blue for this; carefully remove your stencil. Feeling a bit discouraged from the previous stencil, I gave it another go and taped the designed stencil next to the “R”. For this, I used the antique gold paint and carefully filled in the entire stencil, removed and did it to the other side.
I was so anxious to see how my chevron pumpkin turned out, I started to remove the tape… It started to pull the paint off 🙁 Oh well, it’s not the end of the world and I decided to just go over it will the antique gold to blend it all together. I also painted one other medium pumpkin I had with the gold, as well as the middle of my small pumpkin. Next, I went back to my large initialed pumpkin and began to use the pearl finish as a glaze over the entire pumpkin. It gave it a beautiful glow!
I finished the pumpkins off by embellishing them with the ribbon I picked out! This project took me some time, but I’m happy with how there turned out! They aren’t perfect, but I didn’t expect them to be 🙂 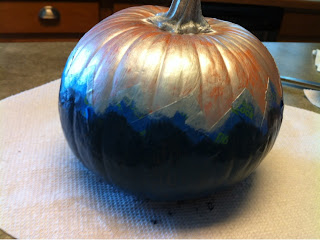 Sharing this project on these lovely sites! Thanks for hosting ladies 🙂

Hi! I'm Fotini! Welcome to Farmhouse Chic Blog, it's such a pleasure to have you here!! Let's get to know each other... Read More…

After what seemed to be the busiest season of my l

Self-care Sunday is in full effect over here 🥰

So today I took a spontaneous trip to @marshalls &

This is a total adulting post 🤣 I bought myself

Happy Sunday friends 🥰 I am still enjoying the

Everyone is playing with toys they got from Christ


Error: API requests are being delayed for this account. New posts will not be retrieved.

Fotini Roman, Farmhouse Chic Blog is a participant in the Amazon Services LLC Associates Program, an affiliate advertising program designed to provide a means for sites to earn advertising fees by advertising and linking to Amazon.com
Enter your name and email and get the weekly newsletter... it's FREE!

I'm so excited you've decided to get the latest from Farmhouse Chic Blog right in your inbox!
Your information will *never* be shared or sold to a 3rd party.